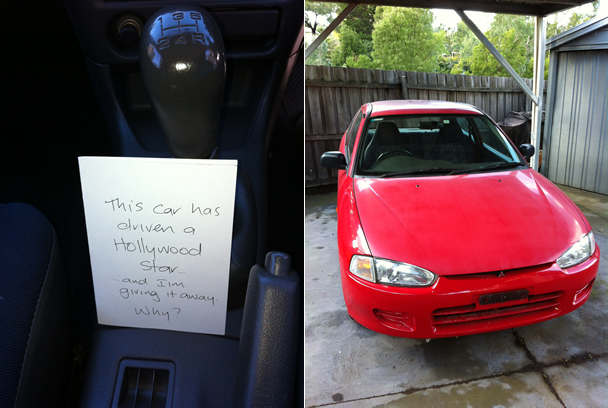 My car has driven a Hollywood star. I’m giving it away. Why? My car has driven a Hollywood star and I’m giving it away. Yes. Giving it away and not taking a cent for it.

This car is a much-loved, slightly tarnished red Mitsubishi Mirage. It’s missing a sun visor. That’s because the visor was autographed by Harry Shearer, the voice of Monty Burns, Smithers and more on The Simpsons. Many people will also know him from his Spinal Tap days.

Several years ago, through the course of my charity work, I drove Harry Shearer in my vehicle for a week. The DNA of this car is permanently etched with impressions of some of the coolest characters you have ever heard.

So why am I giving the car away?

I’m giving it away because I know that doing so can do good for some kids doing it pretty tough. Even though I run my own charity, the m.a.d.woman foundation I made a commitment years ago to give my car to Kids Under Cover when I was ready to move on from it. It’s a commitment I am very happy to keep.

I’ve loved my little red car and it has served me well. It’s taken me on many journeys and the most exciting one was driving Harry Shearer.

It’s even more special to know that the next person to own it will have indirectly bought a little piece of The Simpsons and that all money from its sale is going to charity. If you, or anyone you know, is interested in my Melbourne-based vehicle, or donating your own, get in touch with the Kids Under Cover – Donate your Car program.

I’m not taking a cent. Only the sun visor.