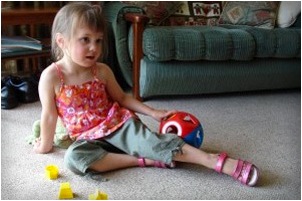 Five-year-old Jessica screamed and thrashed wildly the entire plane journey from the Gold Coast to Melbourne. It took the efforts of both parents to hold her down and a dummy in her mouth to try to quieten her.

In the queue for bags, Jessie’s father overheard a woman discussing his daughter. “Clearly she is totally spoiled and a dummy – at her age! – it’s a disgrace”.

He couldn’t help himself. “She’s autistic,” he said. The woman did not utter another word.

Latest research has shown that autism is a condition that effects up to one in every 160 Australian children. While every autistic child is different, and the severity varies widely, common symptoms are problems with communication, social skills, behaviour, sensory processing and an inability to understand the world around them.

“It’s hard work, but when she’s happy, Jessica is joy. Her smile lights up her face and her giggle is infectious. She’s cheeky, sneaky and wonderful. She is full of energy, and keeps us on our toes. No matter what each day brings, we love and adore both Jessie and our other gorgeous daughter Brooke equally and for what each of them brings to our lives,” she says.

In Jessica’s case, she is unable to communicate beyond her request-based vocabulary of around 10 words, and even those are hard to understand by anyone other than her parents.

She has approximately 100 nouns, but very few verbs and becomes very frustrated when she cannot communicate her needs and feelings. That frustration usually ends up with her screaming, hitting and throwing things.

The September flight was Jessica’s second – the first was just seven days earlier. Despite numerous trips to the airport to familiarize her, a specially made picture sheet which her mother used to try to explain the process, a double dose of her prescription drug Ritalin and two Valium, Jessie was still terrified and unable to either express her feelings or understand what was happening.

Fortunately the woman in seat in front (whose chair was kicked relentlessly by Jessie throughout the flight) turned out to be a primary school aide for an autistic child and understood. Other passengers did not. Multiple requests for front row seats to avoid the kicking proved futile as did turning up early for the flight as advised by the airline. At least on this flight the family was allocated seats together – unlike their first experience.

All the while, Jessie’s older sister Brooke, sat patiently watching the trio do battle and concentrating on her drawings. Her patience is amazing and she knows when to hand over a dummy.

This is just a glimpse into the life of family with an extremely high needs child. Just two hours. What this hasn’t shown is a child who is still unable to be toilet-trained, requires non-stop supervision, and has constant and random violent outbursts and destructive behaviour.

It also doesn’t tell the story of a lack of funding for resources, respite care, community perceptions and importantly, the battle to get an unfunded picture-based system to help Jessie learn to communicate more effectively.

m.a.d.woman and Ellen’s business L’il El are running the Critters with a Cause campaign to raise both awareness of conditions like Jessie’s and funds for picture-based systems to enable Jessie and others to communicate more easily.