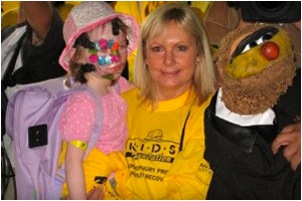 A sticking plaster may be the symbol of its latest campaign, but the programs the KIDS Foundation offers are no band-aid solution.

The fundraising campaign, which involved selling yellow IF branded Band-Aids in various sizes, was held over a week in the lead up to the official Injury Free Day, Friday 17 August 2007. In addition, fundraising activities were also held at supporting schools and workplaces across the country.

A disturbing statistic revealed by the KIDS Foundation shows that on average, 5000 children a day are injured in accidents that require hospital attention. Injury is the most preventable cause of child death in Australia. Tragically, some 300 children aged between one and 14 die from accidental injuries.

Money raised from the campaign’s fundraising activities including the sale of the symbolic yellow IF branded band aids, will go towards delivering school and community based safety education programs. These will focus on injury prevention and provide support and recovery programs for children with serious burns and life-changing injuries.

m.a.d.woman was part of the official Injury Free Day launch at Australia Zoo, on Queensland’s Sunshine Coast. Living up to its reputation, the Sunshine Coast delivered a sunny day for the event despite it being held in winter. Clad in bright yellow IF t-shirts and covered in yellow IF Band-Aids, children, staff and volunteers from the KIDS Foundation arrived at Australia Zoo to awaiting media and celebrities. Radio announcer, Jamie Dunn from Zinc FM, welcomed the group and introduced the children to Agro before the group headed to their star studded breakfast.

After a group breakfast, everybody was taken on a VIP tour of Australia Zoo, which included a special trip to the Animal Hospital where they got to meet and name a koala that had also sustained life-changing injuries. The koala was named TANGO – the name of the personal development and leadership program at the KIDS Foundation.

After the tour, lunch was held in the park at the zoo before the group was escorted to the Animal Planet Crocoseum arena for a show and lesson on Wildlife Warriors 101.

Promoting awareness about the prevention of childhood injury is an important cause and one that m.a.d.woman proudly supports. We love what the KIDS Foundation does and encourage others to get behind this great organisation too.

For more information on the KIDS Foundation and the programs and facilities it has for children with serious burns or life-changing injuries and support for their families and carers, please visit: www.kidsfoundation.org.au